It has been a long, dark winter. From Warsan Shire’s “warsan versus melancholy (the seven stages of being lonely).” Shire is a Kenyan-born Somali poet and writer who is based in London and was born the same year as I was. Video from the incredible Brianna Olson h/t to the legend Dream Hampton

Muito obrigado to Alexandra for reaching the brink of near deafness with me and surviving to tell the tale.Â  Yes I saw windows shake.Â  Who says favela architecture is precarious if it can withstand the sonic onslaught every weekend while IPHAN declares a meticulous building that took four years to construct too fragile for subfrequencies?Â  Maybe the real precarity is in the formal city.

Building sound systems is its own architectural gesture too, especially with the elbow room of a big downtown square, a far cry from the tight squeeze of a favela’s improvised public spaces.Â  Turned on its side, FuracÃ£o 2000’s speakerboxes look like they would tower above downtown Rio’s citadel to petroleum, the PetrobrÃ¡s tower lurking behind in all its sinister, cut rectangular prism glory.

In fact, the vertical architecture of downtown actually served as a sonic prism, trapping in the sound waves that just about made themselves visible — from the shaking window to my vibrating Coke can to the blurry vision when I was trapped in the ricochet effect of speakers against building.Â  Sonic Warfare indeed. END_OF_DOCUMENT_TOKEN_TO_BE_REPLACED

“UPP filho da puta!â€ (Pacification Police you sons of bitches!) So went the refrain to nearly every funk proibidÃ£o blasting out of the walls of speakers lining the main street of the favela Mangueira on a Friday night last month in Rio de Janeiro.Â  Around the corner, the G.R.E.S. Primeira EstaÃ§Ã£o de Mangueira, the most famous samba school in Brazil with its trademark green and pink trim (verde que te quero rosa sang Cartola, their legendary sambista), had already wrapped up its rehearsal for the evening.Â  The action had shifted to the jam-packed baile, a series of sound systems lining the narrow street, like a gauntlet of tamborzÃ£o.

END_OF_DOCUMENT_TOKEN_TO_BE_REPLACED

Just over a week ago, as I settled onto a couch in MC Doca’s living room, a Globo News reporter announced that funk MCs had been sent to prison for apologizing crime. A YouTube video of MC TicÃ£o and MC Frank singing about how FB, the dono (owner) of the recently police-invaded Morro de AlemÃ£o was hiding out in rival faction Rocinha. The report next showed an armed blond police woman–with heavy makeup and perfect hair–shouting and banging on an apartment door. The camera revealed two shirtless, tattooed MCs, Frank and TicÃ£o, who are brothers, blinking away sleep. Cut to a table with a watch, a ring, and a few chains. “The police encountered various gold chains” the reporter intoned. Tremendously successful MCs with gold chains?!? How incriminating!

MC Smith, MC Max, and MC DidÃ´ had also been imprisoned. They also lived in the two communities recently occupied by the police: Morro de AlemÃ£o and Villa Cruzeiro. The deputy accused the MCs of using the Internet to share music making “apologizing” crime and criminals, forming a gang (with the other MCs), associating with traffickers, and doing “marketing” (yes, she used the English word) for drugs and criminal factions.

Next the report announced that MC Galo of Rocinha had been arrested in a traffic blitz in Leblon. He had an arrest warrant for marijuana possession from 1998 and for singing “proibidÃ£o” (“very prohibited” music). The police evidence? A YouTube video of Galo singing in Leandro HBL’s and Diplo’s Favela on Blast. None of the press using the clips contacted Leandro to ask permission. And whenever Leandro has used Globo’s footage, he’s had to pay. A lot.

The video, which Globo used, is Galo’s top hit on YouTube.Â  The clip, they chose, compares the hard life of the MC to the hard life of a drug-seller. It’s not, even “proibidÃ£o.” So, why did Globo weave Galo–who had been arrested a day earlier–into the story? Perhaps to build sentiment against Rocinha, a community speculated as a target for police invasion and “pacification.”

Predictably, none of the reports look at the roots of “forbidden” funk–which refer to drugs, violence, and criminal factions. A common story among funkeiros goes that in the mid-nineties when the various judges prohibited bailes funk in clubs, typically in working class suburbs, the parties and the music moved into favelas. Farther away from police repression, some bailes began to be financed by criminal factions. At the same time funk’s base in Miami Bass & freestyle evolved into the CandomblÃ©- and samba-influenced tamborzÃ£o beat.

I visited the MCs in prison yesterday along with MC Leonardo, the president of APAFUNK, and DJ Marlboro, who’s credited with recording the first “funk carioca” album in 1989. We met with the MCs in a classroom above the underground prison. After one guard allowed us to enter with cameras and voice recorders,Â  another returned to confiscate the camera and voice recorder of two human rights reporters. I hid my point-and-shoot camera. Until the guard came back shouting, “The meeting is over! Stop singing. No cameras!”

When asked if he ever expected to be jailed for his songs, MC Smith responded, â€œThis is a political game that’s happening in Brazil now, so yes…. Ivete Sangalo lives in Bahia. And what’s that? Carnaval, carnaval ‘fora da epoca’ [out-of-season, all the time] and she sings about what happens. And I live in a community that was taken over by the state… one of the most dangerous in the world. And I live in a community with a high risk of violence, a criminal base, high rates of prostitution. And therefore I’ll sing what I live. And what I think. This is freedom of expression. Not only me, but for Max, TicÃ£o, Frank, DidÃ´.”

When will the criminalization of funk carioca stop? People point out how City of God is “proibidÃ£o” that was Oscar-nominated. Yet, funk suffers prejudice unlike high-class art. After the police invaded Vila Cruzeiro and Morro de AlemÃ£o and failed to capture “bandits,” it seems that they chose easier targets: MCs with “proibidÃ£o” videos on YouTube.
[audio:https://duttyartz.com/wp-content/uploads/2010/12/Funk-Se-Quem-Quiser.mp3]
MC Galo-Funk-Se Quem Quiser (words MC Dolores)
[audio:https://duttyartz.com/wp-content/uploads/2010/12/Aqui-o-Bagulho-Ã©-Doido-2.mp3]
MC Smith e MAG- Aqui o Bagulho Ã© Doido 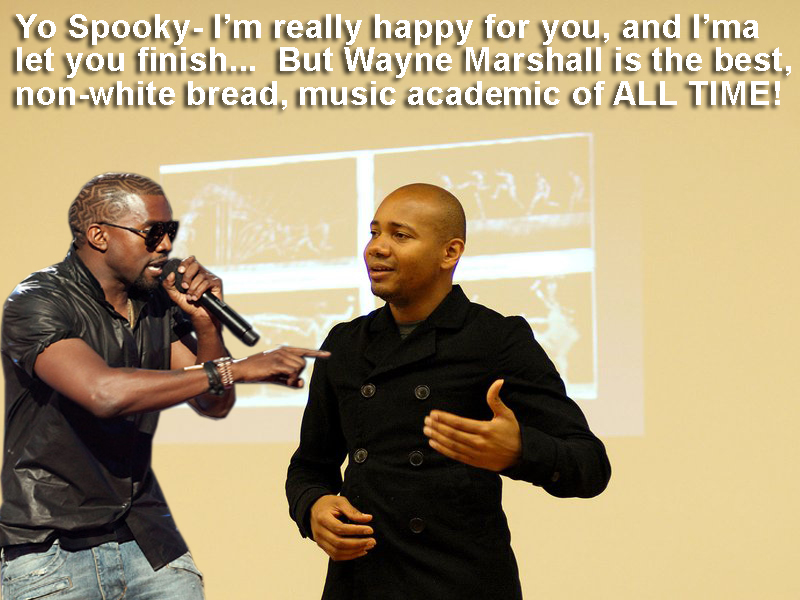 I guess were kind of beating a dead meme on this one- (and I guess I’m kind of becoming the joke blog post guy around here) but for real… if you dont fuck with Wayne Marshall we probably cant be friends.

Normally I delete all the boring press releases I get in my email but this one caught my eye and I thought the readership here might enjoy it. Â Nice to see that the indigenous people in this country still have a sense of humor after centuries of genocide, mis-appropriation of tribal funds and general attempts to erase their nations, culture and selves.

Say Aid Should Be Denied to Anyone Entering U.S. in Last 25,000 Years

Leaders of the five Native American nations that comprise the Iroquois League – comprised of the Mohawk , Oneida , Onondaga , Cayuga , and Seneca peoples – issued a joint statement today declaring anyone who entered the country without their permission after members of the League arrived (here between 25,000 and 60,000 years ago) to be an illegal alien who should be denied all government benefits as a first steps towards deportation. Under the proposed rules, approximately 98 percent of the current U.S. population could be considered illegal immigrants.

Said the statement, “Since we granted no permission for outsiders to enter the country after 23,000 B.C., anyone who did so is an illegal alien and should no longer be able to receive government welfare payments in the form of corporate agriculture subsidies, tax credits for stadium-building, mortgage interest deductions for vacation homes, or food stamp benefits. In the meantime, if they cannot speak any of the Iroquoian langauges, such as Mohawk, they should leave. People should simply accept that America always was, and always will be, an Indian Nation, and must wake up and realize the existential threat posed to our very existence by the broken borders that allowed in Lou Dobbs, Steve Levy, and Pat Buchanan. The only thing sadder to us than watching trash litter the landscape is watching people were immigrants themselves slamming other immigrants.”

Human beings originated in Olduvai Gorge (in present day Tanzania) about 2.5 million years ago. Kikuya tribal leaders from that area responded to the Iroquois in a statement today that said: “We believe that the Iroquois are illegal emigrants. Since they left our land 2.5 million years ago without our permission, they really have no right to be in North America either.”

In a related development, 10,000 angry Tea Partying Medicare recipients protested against themselves today, demanding that “government health care keep its grubby hands off our government health care.” Said one protestor, “I simply hate myself for benefiting from a program that proves that everything I stand for is flat-out wrong.”

Mark Danner is one of the good journalists. His work navigates nearly impenetrable messes of deceit and deception like the 2000 Florida vote recount, the nefarious path to the American war in Afghanistan and Iraq, U.S. Military intervention in Reagen era El Salvador… the list goes on- but I think when you have Susan Sontag call you “one of our best, most ambitious narrative journalists” you’ve pretty much fulfilled your journalistic duty to the world.

One of my biggest fears during the election was that once/if Obama was elected there would be a psychic closure on the Bush years. In a more utilitarian sense, I am afraid that people are so excited about entering a “new era” that theyÂ  forget that there is a lot of unfinished business from the last 8 years that needs to be sorted out. Danner’s latest piece, “US Torture: Voices From the Black Sites,” which appeared in the new issue of the New York Review of Books on Monday, is doing some of the heavy lifting. It contains detailed accounts of interrogations of “highvalue detainees” at secret “black site” prisons. An excerpt from the piece – about a tenth of it – appeared on the OpEd page of Sunday’s New York Times. It’s a potent reminder that the clean up process has just begun.

Wayne says PDFs are the new MP3s- so here is a PDF of the whole article as it appeared in the New York Review of Books. This is painful to read, and while for some it might be confirming what they thought they already knew- there’s something deeply moving about reading first hand accounts of the abuse against “our enemies.”