Whenever I land in a new city, I go into town with three intentions.

*Find out if there is a really old and amazing music from the region.

*Find out what the locals are listening to at the pubs and clubs so I have an idea what my set should be like.

*Find something really new listen to.

Language barriers usually don’t usually impede this. You might go in with an idea of what you’re looking for but the skilled know not to expect anything. Just find something amazing.

Walk the streets with eyes and ears peeled. Somewhere some 14 year old kid that cut class today, came home early and is blasting a local mixtape so loud the whole neighborhood can hear it. On the metro, someone is rockin out their mp3 player so loud you can hear their headphones above the racket of the moving train. A restaurant owner from a foreign country is simultaneously playing the most amazing CD of music from his country to make his establishment feel like home. Music is everywhere and when its good, its usually loud.

I was walking around Oberkampf in Paris with Marie Maurin from Jacasseries Radio an area where a lot of the college kids go to get wasted for cheap and we ended up checking out a bar called International. We were just walking over to see what was playing because there’s always some live act going on in there but what we found heard from outside was amazing.  I’m talkin Konono no. 1 on acid.

The street outside was mobbed with with smokers. Gotta love that you can walk out the bar with your beer there. We pushed through the crowd to get closer to the music. I spent the next couple minutes trying to figure out if what was on the projection screen of the crowd downstairs was really happening or if it was a tape. There was a bearded man in a faded santa suit throwing popcorn at the crowd dancing downstairs. When I realized it was real time I told my friend I needed to push through and check out the basement. 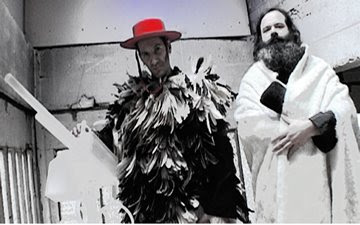 Congopunq as a duo are a fairly odd pair of dudes to behold. Dr Kong is a towering 6’2 dude jumping up and down and pulling all manor of tricks out his suitcase. He is happy to make you crepes on stage or bang a kettle with a broomstick or stare at one person menacingly for the duration of a song. His performance interacts with the crowd and makes the show more participatory something I’ve been looking for in new acts to book.

Percussionist Cyril Atef performs in a custom made jock strap and sits behind the oddest drum kit I’ve ever seen assembled. A djimbe for a kick drum, a random collection of random shakers and percussive instruments gathered from around the globe all microphoned through a sample station to loop and stack beats. There is a roland or korg synth which also ran through the loop station and probably a couple pots and pans. He’ll stack a few loops to the beat add a synth line then proceed to rock out the amplified thumb piano for 15 minute jam sessions of improvised dancefloor mayhem.

This is them performing live in Haiti. Watch how the crowd goes from chanting for the local dancer Chi Chi Man to going totally mental for Congopunq’s jump up carnival vibes.

Cyril, is the long-time percussionist for Mathieu Chedid (french megastar with the oddest haircut in the biz) and he’s also founded another project called Bumcello. He has been living in France for some 20 years now. I  sat down with him to talk about the new project at his apartment and from what I can tell he’s completely insane in the healthiest sense of the word.  Here’s the video for their single from the Candy Goodness album released on Crammed Discs. This guy should be rocking at tropical parties around the globe right now and no one seems to know about him. Promoters and Booking Agents… get on your P’s and Qs and BBM’s and twitter… I’ll be playing with him tonight at the same bar I met him at International 5/7 Rue Moret. Planning on bringing him to NYC soon so please hit me up if you wanna host them at your parties.