At the epicenter of the island’s reggaeton scene stands a home studio in Carolina called Live Music. Home to recording artists Jowell y Randy, and several up and coming acts, Live Music is also the workspace of the island’s top rated producers. Man like DJ Blass (El Artesano), Mr Green and DJ Giann. I didn’t get to spend much time with Mr Green but I spent 4 sessions watching “El Artesano” in action and listening in on DJ Giann’s thoughts for the future of the genre, and I want to share some of that with you now. 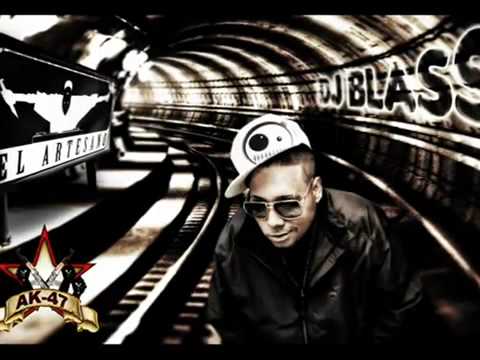 I’ll start off with DJ Blass because let’s face it, the man is a living legend. He’s been in the scene since the reggaeton was a likkle yout we called  “underground” and helped the genre mature into the largest grossing latino music market of the decade. Over the years he has gained work credits with pretty much every artist in the genre from cats you’ve heard of like Daddy Yankee, Tego Calderon, Wisin y Yandel, & Jowell y Randy etc to foundation dudes like Don Chezina, Falo, Alberto Stylee you might wanna brush up on. His discography has the kinda swag that makes you want to believe even his abuelita’s gold chain bangs table.

I don’t know exactly when they started calling him El Artesano (the artisan) but watching Blass work in the studio I understood exactly how he earned the title. Its like watching Data from Star Trek work in Logic and Fruity. He’s a machine that knows the software and it’s shortcuts and plug-ins, inside out. You could walk out to smoke a cigarette and he’ll have had enough time to sketch out a dembow riddim that could be playing in clubs around the world in a matter of months, and he might save the session, or he might just close and delete. That’s just him killing time between sessions. Consider DJ Blass the Timbaland of his demographic. You might not know everything he’s responsible for but trust me he is largely responsible for changing the soundscape of the genre and what’s happening right now at Live Music is going to take things even further.

All that talk of “reggaeton all sounds the same” got a sharp rebuke 2008/09 with Jowell Y Randy’s smash  No Te Veo. Our friend Wayne Marshall, co-author of the official book on Reggaeton, explained exactly why this song was not your typical dembow and the importance of that is why I’m excited. Anything goes now. Blass and Giann have been workin on more soca sounding patterns in the 120 bpm range and what you can expect to hear down the road is stuff like this.

I first heard this song a few weeks ago, at Que Bajo?! when our guest Toy Selectah was getting busy on decks, murdering the dancehall. I flat left a girl on the dancefloor to go ask him about it. That’s a serious tune man. Ol’ girl was fly.

Super secret ninja spy tip- Toy and blass have a collabo forthcoming which I’ve already heard both versions of and I can’t decide which one is my favorite song of the year but its defintely one of the two. fer realz.

Sitting in on the conversations between Toy and Blass was being a fly on the wall to both the history and future of urban latin radio. According to Blass there was a floppy disk with a grip of Sly and Robbie samples that went into a synth and became the corner stone for reggaeton. When I asked him who was big on roads to find out who should I be keeping an eye out for he told me about Omar Garcia’s album which is being recorded there and what I heard there in the lab is fiya.  Toy Selectah playing Blass moombaton and 3ball for the first time and Blass admitting he’d recently been fuckin about with some kuduro riddims and Randy Nota Loca chiming in that he was feeling everything he was hearing made me rest easy that the heads of state we’re united on embracing the larger sonic range and working together on tearing down the walls. DJ Giann, the lesser known but equally talented studio jockey played me some wicked choons that won’t be out for months but him more so than anyone in the camp has his ear toward a 130 reggaeton sound that’s going to cross over and bridge the gap.

Giann to me seems like he’s somehow the link. He produces reggaeton and both dembow and african speeds but he’s listening and partying to variations of house. With the grip of stuff we left him he’ll have a head start on whats gwarning and draw on influences that are going to take the studio in new directions. Not that they need any help making hits, as listening to the radio in Puerto Rico you’ll hear Live Music, DJ Blass and DJ Giann get shout outs roughly a third of the heavily rotated tracks you hear while driving. Turn on the TV while at the studio at the guy standing next to you could well be on screen which makes the place feel simultaneously like a paradox or the vortex of something good. A gateway to the future we’re trying to create.