I somehow (mis)managed to have three mixes out in as many weeks. The first is the ferocious dubwise cyclone “DefinatelyMaybe”, the second “Batture” is a more humid affair… think lemonade, roux sticks and cicadas screeching in open lots on the West bank. 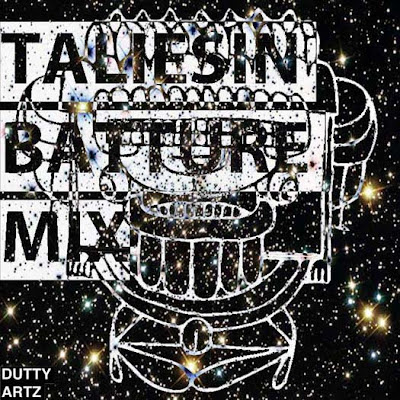 Cover Art by the Infinitely Talented Elvia PW from the Eaters Digest collective.

I stirred up “Batture” for Dave Qualm- the man behind the wonderfully personal blog It’s After the End of the World… It is the inaugural mix in a new series he’s curating- make sure to give him a visit- with features like his ‘Chicago Ghetto House Primer’ you wont be disappointed.
[audio:http://nyc.duttyartz.com/mp3s/Taliesin_Batture_Mix.mp3]
Batture Tracklist:
Bryce Isbell – Four Pills
Lil B – Time
Salem – Sweat
Lil Wayne – The Block is Hot (Haaaawwttt Mix)
El Hijo de La Cumbia – A Través Del Tiempo
77 Klash – Call Me
Colleen – Mining in the Rain
A Guy Called Gerald – Voodoo Rage
Clouds – Protecting Hands pt. 1
Kid 606 – Monster (Cardopusher RMX)
Jahdan Blakkamoore- Nice Green (acapella)
Culturally Relevant Outro

Sometime next week the final gust of this onslaught “Heavy Sick” will be dropping…. If you happen to be in Budapest on the 23rd @ A38 or in Berling the 24th @ Maria Terrasse don’t forget to stay hydrated!