[youtube]http://www.youtube.com/watch?v=yazG1hKuCww[/youtube]If you live in a major metropolitan area, you’ve probably seen these shirts, with the big STOP SNITCHING graphic on them. In the video above, taken from the Criminals Gone Wild DVD series, we hear a masked self-professed criminal commenting on Dipset rapper Cam’ron’s interview with Anderson Cooper where they discuss the subject of police cooperation and whether Cam would snitch on a serial killer next door. Saying he would move and not tell anyone Cam seems to be taking the whole stop snitching ethos to a ridiculous extreme. 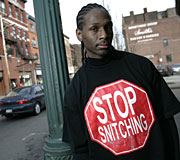 The moral code of not snitching arose as a response to the divide and conquer techniques of white slave holders. By rewarding slaves for snitching on one another the masters were able to ensure that slaves remained divided from one another and would never be able to trust one another enough to organize and revolt. If you can’t tell your fellow oppressed people about your plan to overthrow the bosses for fear that they’ll tell on you then you will never be able to build a group insurrection to overthrow them or take revenge.

Katt William’s in a fairly recent comedy routine decried Lil’ Kim’s going to prison for as he says “NOT snitching, something your MAMA ALWAYS TOLD YOU TO DO!” The fact that a culture of not-informing arose in response to a coordinated program of divide and conquer, setting the oppressed against one another is completely un-surprising and makes perfect sense.

That that would be incorporated into a criminal code also makes very obvious sense. Criminals do not have recourse to the law to settle their disputes and therefore often need to police themselves and those around them, often through violence. Indeed, as the masked man in the video points out, if you are not going to snitch on the serial killer then you have a moral responsibility to as he says “get your boys and go deal with him”. But as he also points out, if you are not a criminal, this shit does not apply to you.

Taken to the furthest extremes, basically, of never cooperating with the police for any reason, as Cam’ron seems to propose with his serial killer comments, reflects a completely amoral view, basically that none of us have any responsibility to anyone but ourselves. In truth, this is not at all surprising considering Cam’ron is one of the major proponents of crack rap, a genre that unrepentantly glamorizes selling drugs in your community and basically reflects a sociopathic and completely self-involved ‘everyone for himself’ attitude. The fact that Cam’ron is being given a lesson on ethics by a masked, self-professed violent criminal on a DVD that advertises among it’s features “assaults, shootings, drivebys, rape, getaways, carjackings, setups, drug spot robberies, home invasions, deadly retaliations, interviews, and more!!!” (from their youtube description) should give all his fans and knee-jerk “stop snitching” advocates something to think about.