[Yacoub creates the White man in defiance of the Divine using the marvels of ancient technology. From a performance of Amiri Baraka’s A Black Mass]

Bredren & sistren, I’m pleased to announce the Afrabian is joining our little dutty family. He kicks off things in fine style with a plutonium-grade essay on Lack History Month, ‘scuse me I mean Black History Month, I mean – as Invisible Man taught us – history is a boomerang; keep a steel helmet handy. Wither historiography as Sun Ra & Ousmane Sembene beautifully rebuke the eaters of time. OK, on to Wendell’s thought-provoking call for Black Mystery – Jace Rupture

Somewhere between the over-articulated symbolism of a black man being inaugurated to the nation’s highest office (again) on the only federal holiday dedicated to a black man who held no office and the State of Disunion on the birthday of Lincoln 150 years after the paper-thin Emancipation Proclamation, Barack Hussein Obama made me realize I’m done with Black History Month.

Its time is obviously and painfully over. Clearly, weâ€™ve missed the point somewhere along the way. I mean, some people actually think Djangoâ€™s Gold Chainz has something to do with the history of American slavery and not Tarantino doing whatever it is that Tarantino tries to do (while letting his negrophilia loose with reckless abandon).

So, I would like to offer an immodest proposal. Let’s change Black History Month to Black Mystery Month. Now, now, before you try to pull my race card, let me explain.

Of course, I can understand, and even appreciate, the need that Black History Month has fulfilled. When the Harvard-trained historian Carter G. Woodson set out to create Negro History Week, he wanted to bring the kind of respectability and sense of achievement associated with Western civilization to the study of the black past. His studies in the science of the state no doubt showed that â€œHistoryâ€ was often a motor as much as a method. This meant, as was the case for the nineteenth century historian Thomas Carlyle, highlighting the great feats of great men (and they were always men).

But is it just me, or is Black History Month starting to seem like a thing of the past? And only of the past.

Each February has come to be just another iteration of the same old list of fait accompli that some historic black figure did in the seemingly distant past. It’s as if we want to keep telling ourselves that if we just keep chanting the lines of tales of improbable success, we could forget the moments of ignoble defeat. But where does that get us in imagining a promising, usable future?

There are many objections to the month-long commemoration that range from the realm of sadly ignorant hilarity that asks when is white history month to the somberly and maybe overly serious declaration that Black History is â€œmore than a month.â€ True to American History, these strange bedfellows put their differences aside for a mutually stimulating if underwhelming exchange in an effort to crush Black History month. And we won’t even mention how despite 37 years of Black History Month, some people still can’t spot a black man when they see one or even know when the month is, as a web video shows.

â€œThe problem,â€ for Howard University historian of the Black History Month Daryl Michael Scott, â€œis that these agents of reform care nothing about tradition.â€ Scott writes that â€œin the name of unity, they want to bring an end to our countryâ€™s most venerable celebration of history. The cultural loss from ending our eighty-three year tradition would be astounding, leaving America bereft of virtually any viable celebration of our past.â€

But if you ask me, even Scott is missing the real point. Woodson and his supporters were really concerned with the issue of Â the mis-representation of blacks in historical writing, the ability of blacks to use history for their own purposes, and finally the textual exclusion from the state’s narrative that reflected and reproduced political, social, and economic exclusion. The question now is besides having a .gov website, how functional is African-American History Month? (After all, they make those govâ€™ment websites for any ol’ thang these days.)

The most problematic thing about History, though, as Robert Young has argued far better than I will ever pretend to be able to, that its not this objective science that we can rely on to discover the truth of the past; rather, History has really been a collection of â€œWhite Mythologies.â€ 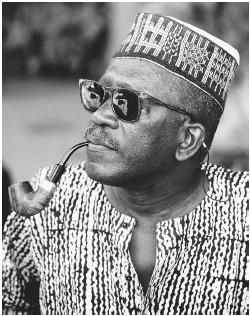 We could leave the Black Past (henceforth to be referred to as the BP) to the historians (or the white mythematicians, if you will), but as the Senegalese filmmaker Ousmane Sembene has said, historicist academics are chronophage: they eat time. Through stuffing the black person and black communities into or out of temporal and spatial categories defined by the Western tradition, historians commit acts of mass violence on black perception of their historical experience while reaffirming the value of the unquestioned universality of a discipline defined by a Euro-American paradigm. History, as a concept, does not quite allow for a consideration of the relationship of black people to the past, present, and future on their own terms.

Such a change would be so much more than just a needed boost in the knowledge economy by generating blogger fodder, page views, and Google AdSense revenue. No. It would energize civic engagement and might even help you live longer. That may be an exaggeration, but what the name change would no doubt be is a supremely political act of resisting the regimes of representation that until this day define what it means to be a black person in America and in the world. Instead of saying we deserve a slice of the pie, Black Mystery Month would make the statement that we don’t like pie.

For we prefer spacecake. Among other things.

Black Mystery Month, in contrast, would almost literally flip the script. It would help black folk seek liberation from the prose of History to the poetry of mystery. This move would be about embracing a way of knowing that laughs at the arrogance inherent in knowledge production that tries to immobilize the fluidity of meaning. It would reject the entire paradigm of knowledge that History represents while enchanting the BP, making it usable for new generations.

Take, for example, jazz musician/demi-god Sun Ra who insisted with all sincerity that he had been sent from the BP which exists outside of time to save black people from suffering through the tumult of the sixties and seventies and deliver them to their alter-destiny.

Or even think about the Nation of Islam’s insistence that blacks were really the lost tribe of Shabazz that had been stolen and made to forget their original language. That Yacoubian history was largely responsible for creating the symbolic universe of meaning that forged the diverse uses ranging from the political activism of Malcolm X to the cultural production of the RZA of Wu-Tang’s richly creative literary worlds. The functional role of imagination for a people should never be underestimated.

The â€œtruthâ€ of these re-presentations of the BP is wholly irrelevant and Black Mystery Month would celebrate that irrelevance with irreverence. These unorthodox manifestations of memory offer â€œa critique of state forms and their associated textual discourses of ethnography and historyâ€ while suggesting possibilities for what Shail Mayaram has called narratives of oppositional practice.

Statesman Henry Kissinger has written that â€œhistory is the memory of the state.â€ Black Mystery is, by contrast, about the memory of peoples who have often been, in one way or another, at odds with power. So let’s leave to the state and its representatives its History and instead, let’s celebrate the memory of Black Mystery!

Wendell Hassan Marsh is @theafrabian: half man, half amazinâ€™. He is also a graduate student in African Studies and Comparative Literature at Columbia University. He writes to get higher and for hire.