Matt Shadetek will perform material from his album The Empire Never Ended live! with a guest performance by Brooklyn rapper Troy Ave, and DJ sets by DJ /rupture, Geko Jones, and Chief Boima.

END_OF_DOCUMENT_TOKEN_TO_BE_REPLACED

For our final chapter of the Dutty Artz February Mixtape Mondays (check previous mixes by DJ /rupture & Sonido Martines, DJ Ushka, and DJ Ripley), my brother Geko Jones and I decided to chime in with a collaborative submission.

END_OF_DOCUMENT_TOKEN_TO_BE_REPLACED

The 1 Brooklyn Shanti just passed us this video and download from his Drop it Steady project longside Baldi.

I’m a big fan of the FX TV show Archer. In this vid, Drop it Steady take an episode and chop suey it into their verses creating new strain variant on the idea of copyright pirate video mash ups. Between stuff like this and Autotune the News, I’m looking forward to an interesting and innovative 2013.

I’m fairly sure by now some of you have heard of the mystical magical fun I have everytime I go down to Colombia and a lot of that has to do with our friends El Freaky in Bogota.

Considered by Uproot Andy as myself as an integral part of the network of tropical parties worldwide like Peligrosa, Muevete, Tormenta Tropical etc, these dudes throw down in a really fun 2DJ/1VJ format incorporating animations from the bizarre but genius mind of Fat Suggar Daddy. I’ve partied really hard longside these guys and I’m really happy to announce the premier of the remix to their single La Pongo. Kuduro collabo from none other than Dany F and Bleepolar, who’s recent remix for Subatomic Sound System featuring Jahdan and Anthony B, I’m really happy to add a lil espaÃ±ol to the kuduro crate.

So here’s a full length mix featuring a lot of the homies I’ve made via my travels and Que Bajo?! parties. Its been an exciting couple of years watching this music go global and getting in touch with a lot of you producer types. There’s a heap of roots remixes, kuduro, moombahton, dembow, boombahchero and the type of latino raveyness that makes ya wanna put your hands on your knees while shouting QUE BAJO CARAJO!!! .

This month we’ve got an awesome guest who just re-landed in NYC after stints in Jamaica, San Francisco and many many places in between. Â DJ Ripley is a longtime friend of Dutty Artz and we’re super psyched to have her with us again. Â She’ll be joined by myself Matt Shadetek, Geko Jones and Lamin Fofana. Come sweat with us!

This February edition of Sweat Lodge we’ve got a special guest for Sweat Lodge all the way from Colombia by way of London. Â Isa GT has been a friend of the DA crew for a while now and making and releasing some awesome music. I first met her a few years ago at SXSW when she decided to jump on the mic and MC a little during my set at the Peligrosa / Tormenta Tropical party. It was outside on a patio and I played between Dubble Dutch and NguzuNguzu (before I knew DD!) and it was the first time I heard El Bebe Ambiente by NguzuNguzu. Suffice to say it was awesome and in the process Isa made a big impression on me with her personality. Actually here’s a picture, w/ everyone I mentioned plus Peligrosa madman and homie Orion. My arm looks like a weird snake but really that’s some historic shit right there. I’m happy to say we’ve connected the dots and here she is in NYC!
>>Â FACEBOOK RSVPÂ <<

Here’s a flavor of what she does, she’s going to do some performing and some DJing at the party.

2012 is here. Â While we’re all waiting for the mayan clock to tick over and usher in either the apocalypse or the dawn of a wonderful new era I suggest you get your mind right with the spirit world. Â The spirits in question here are those concerned with getting drunk, dancing your ass off and sweating out a year worth of ghouls and goblins. Ë™âˆ† INFOS âˆ†Ë™ DUTTY ARTZ SWEAT LODGE DJs: Geko Jones Matt Shadetek Atropolis Lamin Fofana Taliesin Â  Â  Friday Jan 6th 10PM-4AM $$ FREE $$ ADMISSION at The Cove, 108 N. 6th St, Brooklyn NY. Â Take the L train to Bedford or G to Lorimer and walk. Â >> RSVP ON FACEBOOKÂ <<

I invited some friends to eat in exchange for a bread-breaking data swap. I’m definitely not on a culinary level with my dude DJ Rajah over at SoulCocina but this is really what meetings should be like. Exchanging in currencies that don’t depend as directly on the dollar really has an intrinsic value in making people connect. It leads to better less guarded conversation and reminds us that if we work together, there’s always more to eat on the table. Here’s my TOP 5Â  Things I won in the West Coast Data Swap

First up, G-Notes, the guitarist and beatsmith behind the hybrid flamenco act Granada Doaba and all around Gnawledge famalam hit me with a few remixes and edits

Now my homie, Santero in the Bay Area has been holding me down for a few years now. I was happy to crash at his this time around and spend some time getting to know what he’s been up to.Â  I learned he has been working with our homie Boogat up in Montreal.. Notice how the cover art is Boogat with the fam all around at a BBQ or somn… home cooking how we do !

(Incidentally, since that convo I’ve been rocking Dos Cervesas (prod by Poirier) off the PURA VIDA EP like its my job) 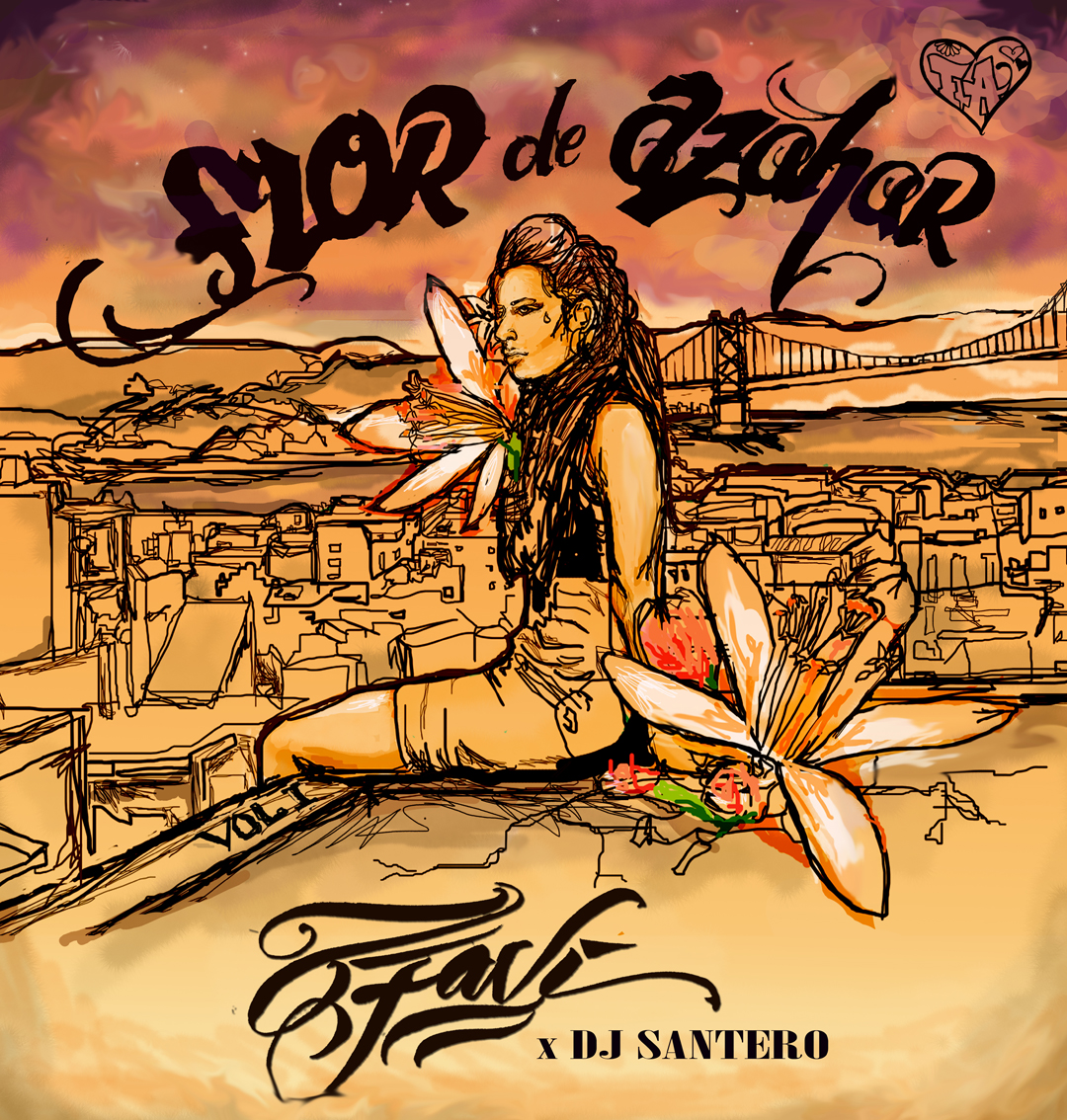 Santero also put me on to this Goapelle/Los Rakas Remix I had admittedly been sleeping on. It was featured on Fader and Rcrd Lbl months ago. Be sure to check them out on November 19th with me and Dre Skull at SOBs

I’ve been on the road lately trying to get my worldwide airmiles up like the Jetlag King- DJ /Rupture. Miles to go before I sleep or even come close on that one, but the result thus far has been getting to play with a lot of ladies and gents I respect and admire and making friends of them along the way. Coming up in a couple weeks here in NYC, Que Bajo?! and Conrazon are collaborating with SOB’s to debut a friend and inspiration of mine by the name of Humberto Pernett. I wanted to take the time explain to you all who this guy is on a personal level as I’ve recently spent a great deal of time with him in Cali for the Petronio Festival and got to know his story.

Pernett’s dad was one of the founders of el Carnaval de Barranquilla. He grew up around amazing musicians his whole life. His aunt Carmencita Pernett was one of the first artists to take cumbia to mexico. Artists born in this type of conditioning? Femi Kuti comes to mind..

I think just by looking at the record cover you can tell dude’s family were some serious party people.

It was inevitable from his upbringing that Pernett would go on to explore los ritmos de la costa. Tambora, cumbia, bullerengue, puya, mapale sound more like the names of root vegetable or ingredients to a sancocho stew than names of rhythms but then all these styles are so distinctly satisfying on the dancefloor that their cohesion only make sense when you think about them that way.

Taking a blessing from his musical godmother, Toto la Momposina, Pernett would go further south to Bogota where he would meet Richard Blair, a UK-born producer and they would go on to form the band Sidestepper whose 3am: In beats we trust album would reverberate worldwide.

As someone who listened to the 6 degrees music label early on, and a researcher of world music fusion for quite some time I can say with confidence that the music from that album would go on to inspire a great many producers for years to come. Our global/tropical bass scene has a lot to thank them for. Electronic music, indeed, but at its essence their sound was a less mechanical and rooted deeply in Colombia’s rich musical heritage. It was a clearly defined turning point for Latin music.

Moving on to work on his own projects Pernett has continued folding time and space to create his own blend of psychodelic caribbean sounds. Carving a sound very much his own.

Change isn’t an overnight thing. The last car in the roller coaster sees the turn before it happens. But from where I’m standing, Pernett is a largely unsung hero who has and is helping shape the future of latin music.Â  He’s someone that we should pay a lot more attention to. He’s so far ahead of the pack that it will probably be another couple years before the world catches up to his sound let alone his performance capabilities.Â  His ableton live set up lets him trigger and effect tracks, while playing gaita or any number of traditional instruments which he can also effect, while singing and dropping some surreal visuals using his filters on his laptop cam. He’s one of those artists that keeps pushing himself to do more. To be more. And you should too. Be there to see him Oct 9th and feel more.

Geko is back from Colombia and Venezuela.Â  Next obvious stop?Â  Cruise down the NJ Turnpike to Philly and help me + Juanderful celebrate one year of Tropicalismo!Â  Uproot Andy, DJ /rupture, Maga Bo, and Poirier have all stopped by in the last twelve months, time to look forward to the next twelve.

A couple years ago our friend Filastine was in town and I remember not being able to join him on some crazy boat ride on a trash barge that had been re-purposed as an art installation. There was talk of some armada of these vessels. Like minded people are bringing you a really fun event tomorrow.

Last Sweat Lodge was our best yet!Â  Big shout to DJ Beto for coming through and throwing down with me, Geko Jones and Atropolis.Â  I had a blast.Â  The next one is approaching quickly and I am super excited to announce that we’ve got Brooklyn’s own Dre Skull as our guest.Â  Dre Skull runs the Mixpak label and just produced an amazing record with Vybz Kartel.Â  Kartel is to me one of the best and most interesting artists in dancehall music right now and I cannot overstate how impressed I am with Dre for his role in creating Kingston Story, their album.Â  Read all about it at Taliesin’s post here. On the night your’s truly Matt Shadetek, Geko Jones and Atropolis will be raising the temperature with your favorite tropical sounds so come dressed to sweat.

I’ve been traveling to Colombia at regular intervals to present a new sound fusing folkloric Afro-Colombian rhythms with modern day electronic music production techniques that harmonize into a synthetic club sound rooted in tradition. Via the internet, the birthplace of Cumbia has become a source of inspiration to a number producers worldwide. Recently, we invited some of the top names in the scene to a bandcamp in Colombia and a filmmaker to document it.Â  We want to provide an insider view of the impact this music is having on the local scene and how a small network of globally minded producers are defying conventional standards of Latin club music.

We have a couple weeks to get this production costs for completing this project funded. To hear more about how you can help please visit http://www.indiegogo.com/Pico-de-Gallos