We at iBomba are so excited to kick off 2013 this Monday, January 14th with the dope sisters from D.C – Maracuyeah! DJ Bent recently wrote a dutty blogpost about G-Flux’s new tune, Distrito CÃ³smicoÂ , reppin’ the D.C. scene and Maracuyeah’s critical role in uniting people through music and celebrating immigrant cultures in the capital.

END_OF_DOCUMENT_TOKEN_TO_BE_REPLACED

Since you all loved up that last footwork / juke post I made I figured I’d share a video piece that Wills Glasspiegel who did the audio I posted did, I assume on the same trip to Chicago. Â Some of the material is the same but since it’s about dancing the visual is pretty key: watch those feet work!

Also Wills was nice enough to make the audio in the original post (below) downloadable for those of you who requested it for your filez.

Also Traxman who’s in the piece will be playing in NYC this Friday at an underground party at an undisclosed location in Williamsburg, Brooklyn. Â Also Total Freedom from LA! Â Looks like there will be some footwork dancers there too. Â Shout to Azizaman for putting it together, looks dope. Â FB event here w/ info.

I am not involved with this but am showing it a bit of promo love because I remember what it was like trying to bring Grime artists to NYC when no one knew what it was but I just loved this new crazy music and wanted to share. Â It ain’t easy! If you like this kind of stuff vote with your dancing feet.

A week ago as I walked besides the still-not-entirely-closed off sewer stream in Rocinha, the favela where I’ve been living in Rio de Janeiro, a truck approached. Bamboo stalks and palm fronds filled the bed of the truck. Several young boys and pre-teens with their faces streaked with black paint jumped off the truck as it slowed to a halt. They tumbled on the ground or ran wildly, crying out. I asked my friend what was happening. He answered simply, â€œFesta caipira,” “country party.”

That weekend and the next this area of Rocinha, ValÃ£o, would throw its Festa Junina, a party which no one seems to be able to explain very well to me. In the rural Northeast of Brazil, this celebration trumps Carnival in popularity. Although called Festas Juninas, June Parties, the parties don’t start happening until June 24th and only happen in a big way in July. SÃ£o JoÃ£o and SÃ£o Antonio, whose saints’ days come in late June, are the main saints involved. “Junina” supposedly–I’ve never heard this, only read it–derives from JoÃ£oina, from SÃ£o JoÃ£o. Children eat candied apples, dress up like country bumpkins, brides and grooms, or aristocrats and dance in quadrilhas to forro and other Brazilian folk music. Pyrotechnic explosions have replaced the “traditional” bonfires which people dance around. During the day, dogs bark and I try not to jump (like a gringa) after every boom of firecrackers.

In many communities in Rio, Festas Juninas have died out. But in Rocinha, home of many Northeastern migrants, each neighborhood seems to throw its own outdoor “June” party Fridays, Saturdays and Sundays. Last Friday I spent almost eight hours at two different festas juninas in Rocinha. At the second one, boys and girlsâ€”whose costumes were specially sponsored and more sparkly than mostâ€”danced quadrilhas from about 2 to nearly 4am. Rural roots were reenacted and the past re-sounded in a multiply-displaced, secretly pagan celebration of the summer solstice in the middle of (still tropical) winter.

[youtube]http://www.youtube.com/watch?v=xyAhRPh6ETA[/youtube]
Bee and I drive for hours from Jeppestown looking for Nozinja’s house on the edge of Soweto. I’m using the GPS on her Blackberry- but keep fucking up and suddenly we’ve left the city behind and are driving for 20 minutes out into the countryside where sprawling townships blend in from afar with the yellow umber tall grass. The drive was supposed to take 45 minutes- but we arrive at dusk to his spot next to the rail tracks in a clean cut row of brick single story houses. A gleaming Benz sits in the dirt driveway and Nozinja, creator of the Shangaan Electro sound, is inside waiting for a BBC interviewer to call back. I apologize for being hours late- but he says it’s fine and just makes fun of Bee for not knowing her way around Soweto. Shangaan Electro is the new marketing title for the wildly inventive update on Shangaani music that Nozinja has been making and selling throughout S. Africa for years.

This is a classic untouched genre discovery story – weird computer music, hyperspeed dancing, clown costumes, youtube, serendipitous ringtones, cancelled return trips home from South Africa- but the music is mindblowing– and more so for all seemingly coming from the mind of one man. Nozinja gives me one of the his early releases from Tiyiselani Vomaseve- a group produced by Nozinja consisting of five women who dance and one who sings. The CD is hand screen-printed and comes off a spindle from his distribution/storage cupboards in the kitchen- it is hard to get all the way through, the midi music is relentless and exhausting for the uninitiated- but the rest of the Shangaani music that has been coming out via Honest Jon’s has been addictively listenable. After killer coverage of those releases, including a massive summer tour, Nozinja is set to start releasing his own music digitally to the world via his eponymous label. The first two releases are availble now from Tiyiselani Vomaseve (itunes) and the Tshetsha Boys, whose album is straight forwardly titled “YouTube Top Hits” (itunes).

Stream a couple cuts from the Tiyiselani album below.

More Photos and Tour Dates After the Jump.

END_OF_DOCUMENT_TOKEN_TO_BE_REPLACED

In the spirit of pride week and Gay Bajo?!

Shout to Diego for the heads up & all the visuals!

Here’s a video from Dutty Artz family and habitual transnational/borderless bass collaborationist Maga Bo. Filmed in Addis Ababa, Ethiopia, the beautifully shot video for the track “Gondar” which from Maga Bo’s most recent release Ransom EP out now on Senseless Records. Not only providing a glimpse into Bo’s recording process and collaboration with the two Ethiopian musicians – masinqo player Eritbu “Solomon” Agegnehu and singer Entenesh WassiÃ©, we are treated with some wonderful Addis ambiance, plus some beautiful girls dancing to the traditional Azmari song, which Bo laced up/reinforced with some dancehall-like riddim! Stream to the entire Ransom EP on Bandcamp – with remixes from Filastine, Timeblind, Teleseen, Pacheko, and Fletcher.

It also goes without saying that Bo is repping Dutty Artz extra hard in this one! We’ve some some incredible gear coming your way soon too.

Now Made in Africa is every 1st Friday of the month at Bazaar Bistro North African Restaurant in the Union Square area.

And we’re every first FRIDAY Night of the month! So if you couldn’t make it before because it was on a weekday, now’s your chance.

& here’s a video for all the gyals + man dem who like to see man wine! dance competition in cote d’ivoire –

We’re back at Gallery Bar for the second edition of Made In Africa this Thursday – the night of birthday celebrations! It’s Boima’s birthday, so do come out and show him love. Birthday boy Chief Boima and yours truly will be deck, supplying you homegrown and international heat and oil as we say farewell to Winter in America, Harmattan in West Africa, etc. and greet (slightly) warmer/dizzy/better seasons!

Pechiche = showing love + human exchange + comradery + laughter + sharing in a moment with friends + giving each other what you want with celebratory disregard + going hard at the party. It’s an energy my set has been reflecting lately and its very much a latin vibes ting. I’m happy to announce my first gigs in London this weekend longside Cal Jader/ DJ Arias/ and celebrating the release of Axel Krygier‘s album Pesebre with the man himself.

Friday and Saturday, May 21 & and 22, starting at 8pm, Award-winning New York-based Zimbabwean contemporary dance artist and choreographer Nora Chipaumire will be teaming up with musician Thomas Mapfumo â€” the legendary â€œLion of Zimbabweâ€ â€” for the New York premiere of lions will roar, swans will fly, angels will wrestle heaven, rains will break: gukurahundi at the Kumble Theater at Long Island University, Brooklyn Campus. Along with the live musical acompaniment by the great Thomas Mapfumo & The Blacks Unlimited, dancer Souleymane Badolo will also join Chipaumire for the performance.

We have a pair of tickets to give a way to the performance on Saturday. The first reader to respond to the question by sending an email with the correct answer to family@duttyartz.com (and make sure you include the word contest in the subject line) wins the pair of tickets.

The ticket contest is OVER! The contest question was what does “mapfumo” means in shona? Answer = “spears”

END_OF_DOCUMENT_TOKEN_TO_BE_REPLACED

New York Ravers, next weekend come get dutty with me on Saturday night at an underground party in Soho details here. Thanks to everyone who came out to Oceans of Blood and skanked out this past Friday, great party. Seems like I’m getting asked more and more to play at these underground jams in informal locations more and more, I’m really happy to see them happening again after many years of being verrrry bored going to regular clubs in NYC. Support these events and let’s keep ’em happening.

Here are some photos from Tormenta Tropical at SXSW. I don’t have time to write a long post but suffice to say I was honored to play with all these great people and have such a great party. You are all legendary and I love you. Photos by El Subcomandante Quito, full album here. 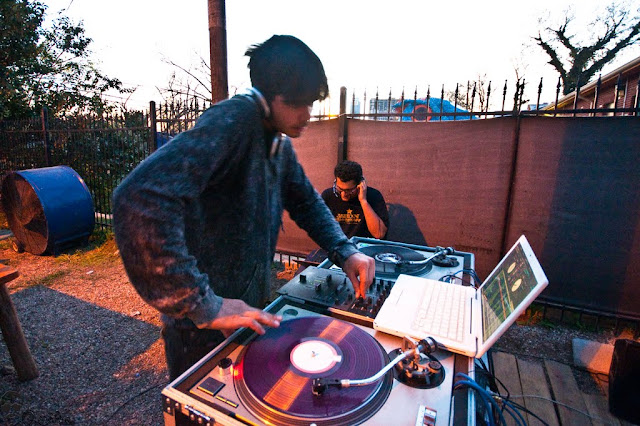 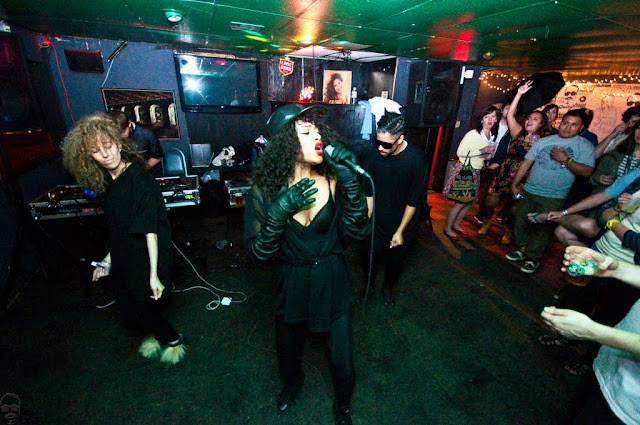 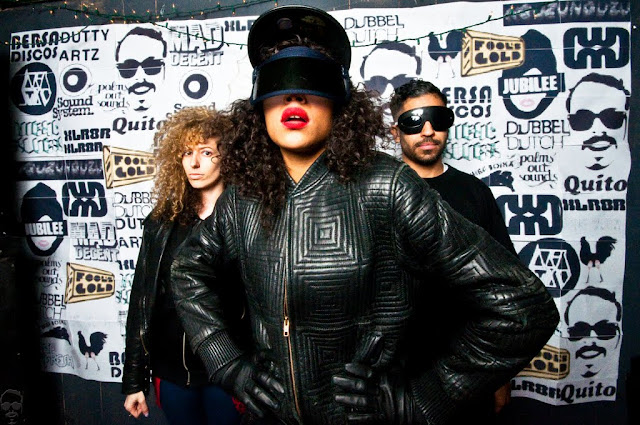 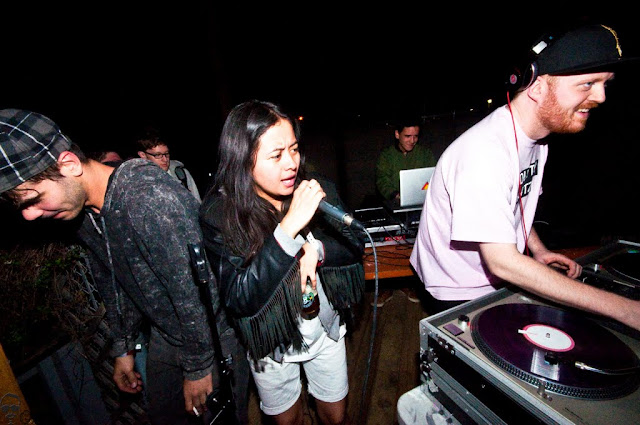 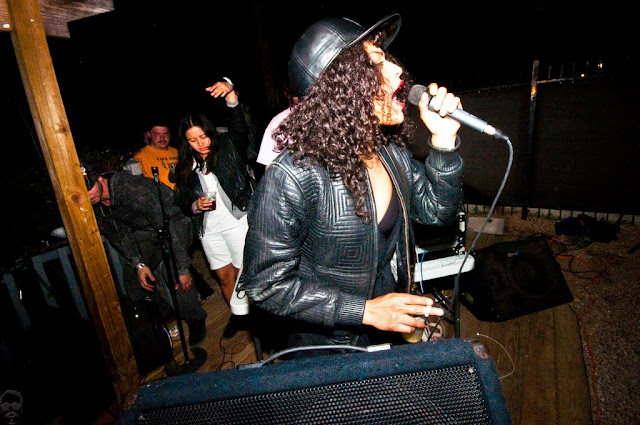 MS MALU MCING WITH ME 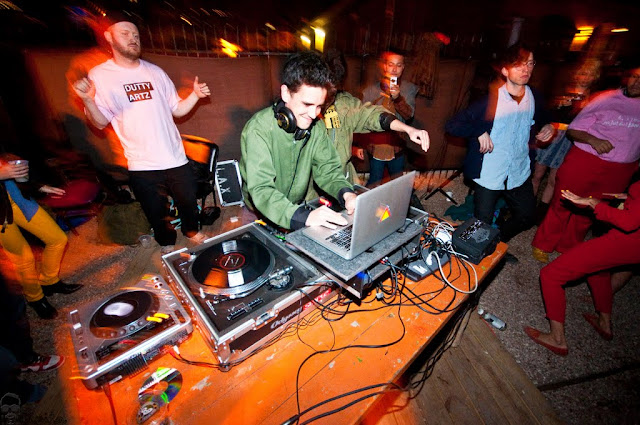 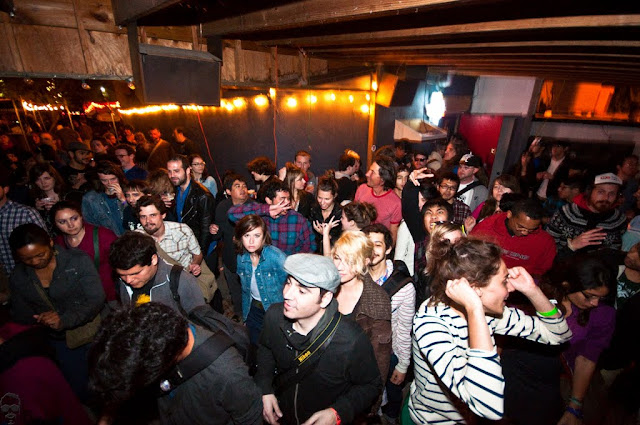 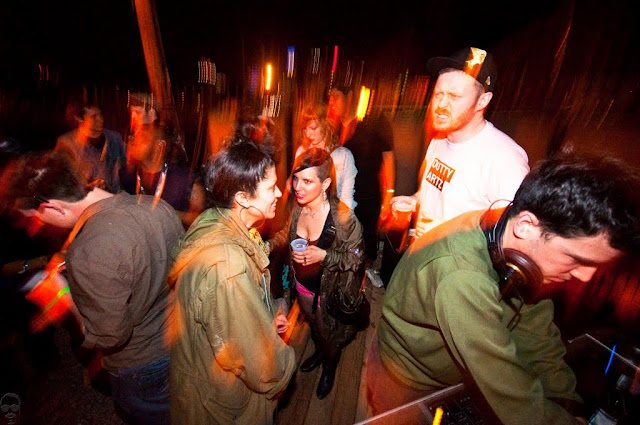 ME MAKING A MAD FACE TO NGUZUNGUZU, JUBILEE STANDING BY 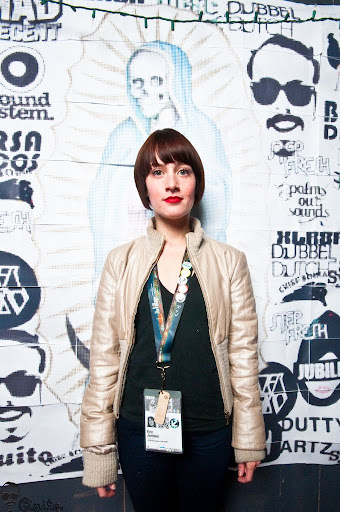 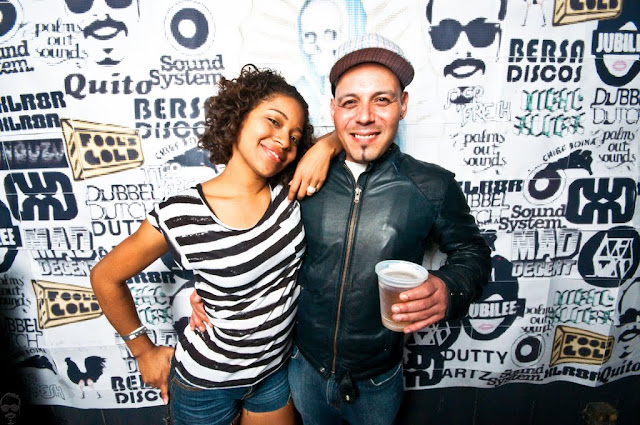 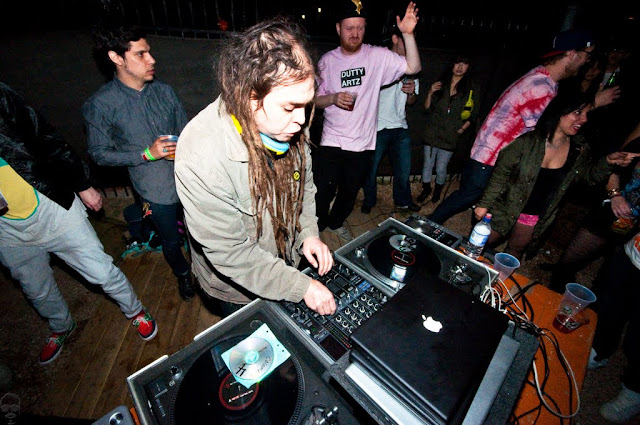 ME MAKING A MAD FACE FOR TOY SELECTAH 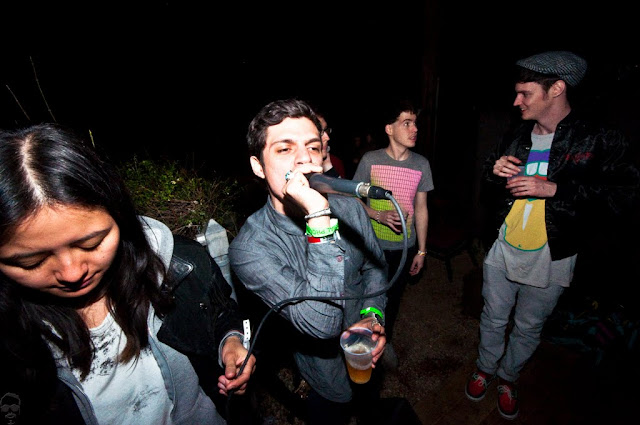 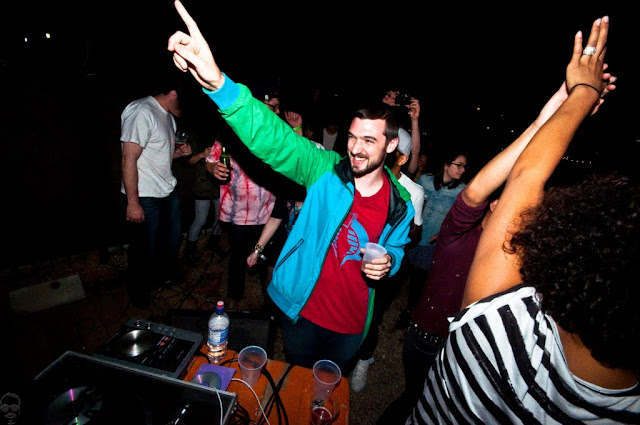 ANDY IS ENJOYING HIMSELF 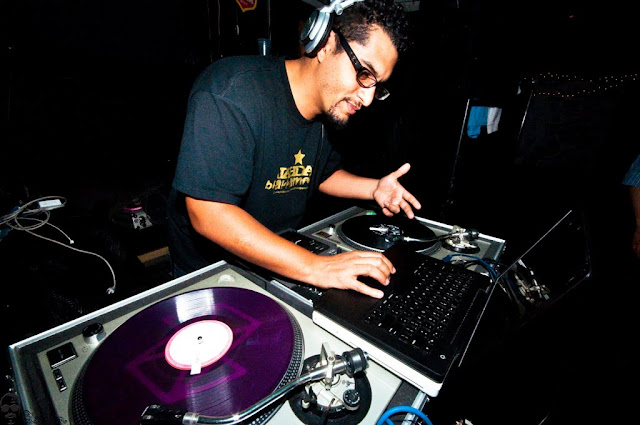 JONES HOLDING IT DOWN (WITH HAIR!) 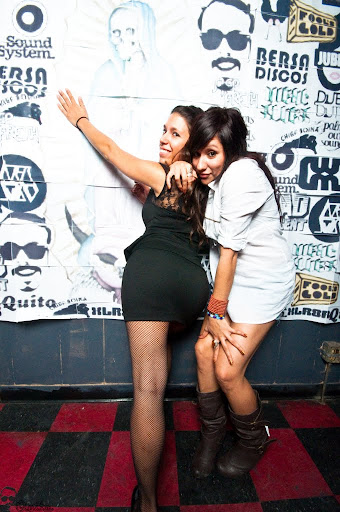 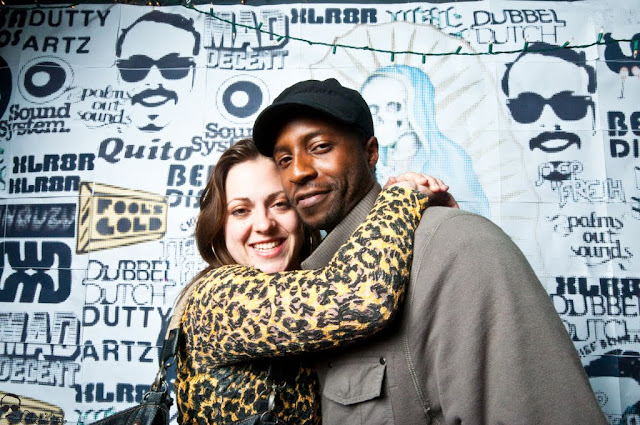 MR WAYNE IN THE PLACE 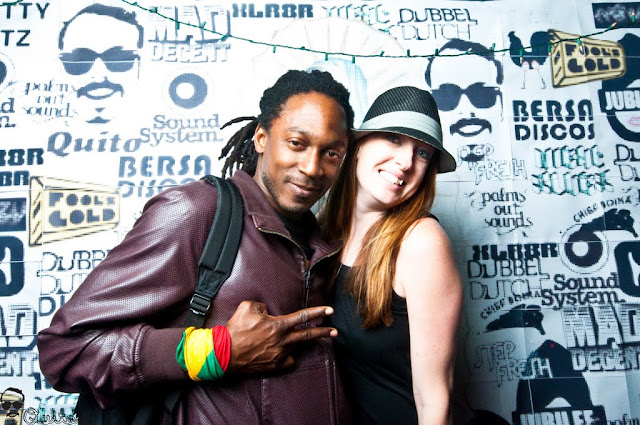 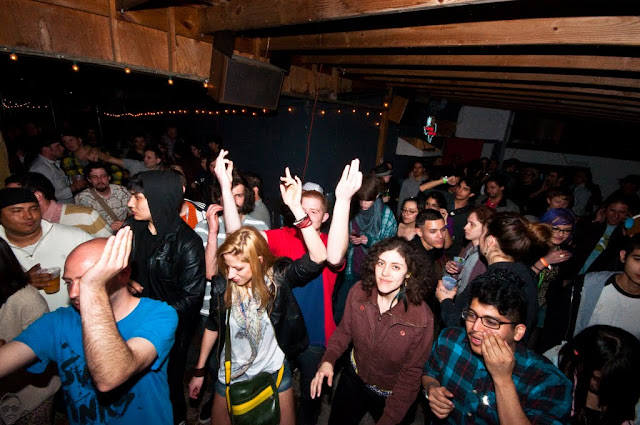